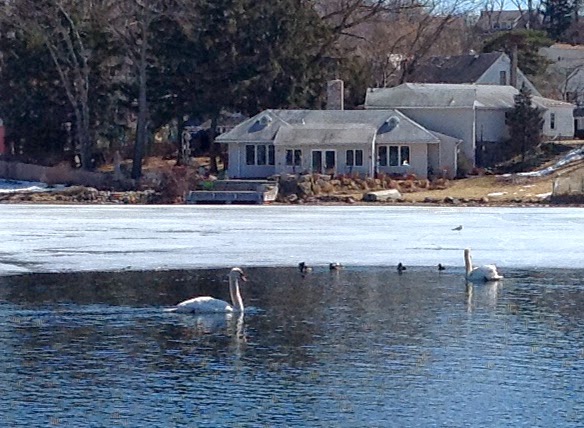 A few days ago, on my way home from doing errands, I drove past Lake Musconetcong, a portion of which is located at the end of my street. This lake is the largest breeding ground for mute swans in the state (as an FYI, tundra swans, aka Whistling Swans are indigenous to Antarctica). Although it was too early for them to procreate, a few of them were chilling out on the water, and I was able to get close enough to snap this photo.

Despite being a self-confessed shore (to non-New Jerseyans, that’s beach) person, this got me to thinking about the abundance of beautiful lakes up here in Sussex County. Since summer is just around the corner, it may be useful to you, dear readers, to know that there’s lots of freshwater fun in this northwestern corner of the state.

The state’s largest lake, boasts a 45-mile shoreline and was once a thriving summer community replete with waterfront hotels, speakeasies and the famous Bertrand Island Amusement Park, which provided the backdrop to scenes in Woody Allen’s Purple Rose of Cairo. These days it’s mainly residential. Now non-residents can enjoy the lake by visiting Lake Hopatcong State Park, where you can swim, picnic, boat, and relax.

A little known fact is that Lake Marcia was named for the girlfriend of the cartographer who originally mapped the area. It is surrounded by High Point State Park. The highest point in the state, High Point Monument, is close by, and those ambitious enough to climb its 220 steps, will be rewarded with spectacular panoramic views of the surrounding area. The lake has grass and sand beaches, a concession stand and adjacent picnic tables and grills. During June through August they also have a popular concert series.